How to calculate costs and pricing.
In June 2011, the USDA published an Interim Rule addressing revenue generated from the sale of nonprogram foods. Based on this rule, school food authorities must calculate whether the revenue they receive from selling nonprogram foods covers all the food costs.
According to NFSMI, “Non-program foods are defined as foods and beverages sold in a participating school, other than the reimbursable meals, purchased using funds from the non- profit foodservice account.”

Pre-pricing Considerations
​When pricing nonprogram food items, it is important to keep in mind that they must be priced to cover all the costs incurred to produce them. Non-program food items cannot be subsidized by Federal reimbursement, student payments, or other unassigned nonprofit foodservice revenues.
​
However, based on its research, the USDA has found that schools, on the whole, are covering only 71 percent of what it costs them to sell nonprogram foods. As a result, food pro- grams have been absorbing the nearly 30 percent shortfall. In these times of serious deficits, that is not a good thing.

Therefore, it is vital that schools begin to price items in ways that assure the total revenue these nonprogram foods generate, is in proportion to the total food costs they produce.

Two Pricing Formulas
Most schools have a habitual formula they use for pricing nonprogram food items. However, to work well, every pricing method should first take several things into account: (1) the demand for the item; (2) the total cost to prepare the item, including all labor and benefit costs; (3) the marketing costs; (4) the customers’ perceptions of value received versus the cost; (5) what the market will bear; (6) the prices nearby districts charge, and; (7) your program’s financial goals.
​
Here are two industry-standard formulas you could use for pricing nonprogram foods:
​
1. The “Desired Food Cost Percent Mark-up” Method
The most common method used for pricing schools’ nonprogram food items is the desired food cost percent mark-up. This simple method, based on food cost, requires three steps: 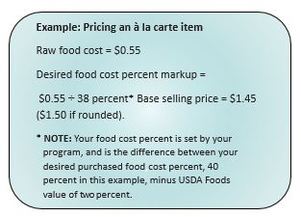 The disadvantage with this method is that other costs, such as labor and benefits, are not considered before determining selling price.

2. The “Overhead Contribution Plus Desired Profit Percentage” Method
A second method for pricing nonprogram food items is called the overhead contribution plus desired profit percentage.  This is perhaps a more reliable method, because it includes all nonprogram food costs, including labor and benefit costs.  Therefore, it provides a more dependable selling price. In many schools, labor cost percent, including benefits, is higher than food cost percent.
​
The formula for this method is:
Selling Price = Raw Food Costs ÷ 100 percent minus (Total of Nonprogram Food Cost Percentages + Profit Percentage) = Percent Allowed for Food Costs 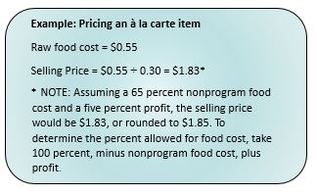