A consultant is using detective skills to uncover why expenses are rising and profits
are shrinking.
In the second installment of this multi-part article, she pinpoints overproduction, poor purchasing practices,
​and low yield of purchased food as problems requiring solutions.

Part Two  (Originally printed in Dietary Manager, September 2004 and the principles still work today)
In Part One, Connie Clue – our resourceful and intelligent consultant – was working diligently on “The Case of the Disappearing Money” at ABC Long-Term Care Facility in Everywhere USA. Each month more and more of the facility's money has been disappearing and it is up to Connie to discover where all the money is going. Her investigation so far shows that ABC facility has a food cost of $6.10 per resident per day. Upon further analysis, it appears that much of the money is spent on special functions, supplements, nourishments , staff meals, free meals, and floor stock. In addition, ABC had not costed out menus and was not using standardized recipes. Connie’s first plan of action was to review and adjust the menu and implement pre-costed standardized recipes. Once that plan was implemented, it was time to expose more of the culprits…
​
Connie sat staring at the notes in front of her. She reviewed her list of the top reasons for excess food costs in long-term care facilities: 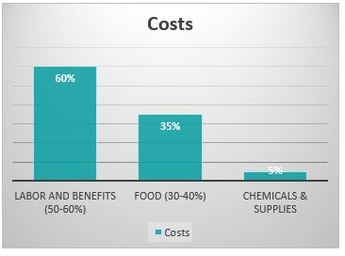 She felt great pleasure crossing out two of the top items (not following well-planned menus and not following standardized recipes), but there were still 11 to go. Since the dietary department is the second largest expenditure at the long-term care facility, it merited close scrutiny.

​She looked at the average dietary department breakdown figures:

Breaking down the food category she reviewed the average breakdown for food purchased:
Connie pondered the question, “Is the money allocated for the residents actually spent on the residents?” Her experience indicates that sometimes facilities track money from different departments and it gets mixed in with resident food cost. She needed to shed light on the following dark corners where the evil “cost gremlins” lurked:
Connie had no problem listing these costs under the “umbrella” of food cost, but she knew they should not be included as part of the per-resident-day (PRD) cost. The standard categories included in determining the PRD cost are:
Breakfast
Lunch
Dinner
HS (Hour of Sleep) snack
Lumping these extra costs in with the PRD presents a distorted picture of the actual price of feeding residents. Connie was well aware of the danger: In an effort to reduce food cost, the facility might cut the quality of the food for residents. In reality, the excess expenses that need to be curbed are actually the extra costs noted earlier. She grabbed her pencil and started figuring:

Connie scribbled a note to herself to ask ABC why they are choosing the supplements they are currently using, and to find out if the physician writes the supplement order for a certain brand. It would be to the facility’s benefit if the physician wrote the order for “house supplement.” The facility can then decide on its minimum standards for nutrients per serving (calories, protein, vitamins and minerals). Other areas she needs to investigate are:     meals?
Staff and Free Meals:
A meal costs an average of $1.50 without labor.
ABC’s staff and free meals costs are $1,125/month
Floor Stock:
Juice (20¢) at 30/day $180/month
Milk (20¢) at 30/day $180/month
Ice Cream (12¢) at 30/day $108/month
Cookies (5¢) at 100/day $150/month
Total (not including labor) $618/month

Connie knew that these extra costs should not be included in calculating resident food cost per day. Viewing the current cost of $6.10 PRD and subtracting $1.02, she was looking at an actual per-resident-day cost of $5.08. And, she hadn’t even begun probing into the special diets yet.

Looking at her notes on special diets she noted that
When she added the Special Diet expenses ($3,231) to the additional food expenses ($3,108), she came to the following determination:
These extra expenses added an average of $2.08 PRD to ABC facility’s food budget (a typical 100-bed unit with a budgeted $4.25/day). The “real” PRD for ABC facility was closer to $4.02.

But Connie wasn’t through yet. She studied the list of top reasons for excessive food cost again. Hidden here were more clues that would point her in the direction of where to find ABC’s missing money.

2.  Failure to Follow Well-Planned Menus.
This was discovered earlier to be a major issue for ABC facility.

3.  Poor Purchasing Practices.
Connie sighed. She could write a book on this subject. Purchasing is more than just placing orders, it is buying the:
Through her many years of investigations, Connie has seen it all. One of the most common mistakes she repeatedly observes is over-purchasing and under-purchasing. Neither of these practices helps control food costs.

Over-purchasing:
Under-purchasing:
If she could convince ABC facility of anything, she wished she could make them realize that the purchase price per unit is not the determining factor in choosing a food item – it is how many edible portions are produced and served.
Purchasing:
Connie knew from watching ABC facility place orders with their favorite sales rep (Larry from “Best Deals Food”), that the cooks left it up to Larry to determine which products they receive. Larry always had the best bargain basement price on their top 10 products, and ABC facility just assumed that all of his prices were the lowest. Connie felt the hair prickle on her neck – this could be a particularly costly assumption for ABC facility! Without utilizing specifications, ABC facility was vulnerable and at the mercy of the sales representative to determine what they needed. What they didn’t realize was that commission motivated Larry, rather than what was best for ABC. Connie was well aware of the difference between products and how that difference affects both the product received and the price.

Often the lower-priced products actually cost more, because they have a lower yield. Hence, managers should calculate the edible portion costs, not the purchase price per unit.

This fact helped clear up Connie’s last case at PRQ facility. Now that was a very interesting case, Connie reflected. The answers seemed very obvious at first, but Connie knew from many years of sleuthing that she couldn’t always rely on the obvious. In this case, PRQ facility was purchasing corn from “Fast Freddy” at “Low Price Foods.” They were paying $12/case for 6/#10 cans of corn. “Truthful Ted” from “Saving U Foods” stated his corn was $14/case for 6/#10 cans, but that his corn was actually less expensive. At face value it appeared that Truthful Ted had some issues with basic math, but when Connie calculated, she found that Ted was indeed correct. Have you figured it out? Fast Freddy’s corn actually had more edible portions. Freddy’s case of corn cost 57¢ per pound, while Ted’s cost 55¢ per pound. Truthful Ted’s case, which had 4.5 extra pounds, offered a savings of $2.50 per case.

Connie made a note to herself to check whether ABC facility belonged to any Group Purchasing Programs (GPP) or Group Purchasing Organizations (GPO), a.k.a Prime Vendor Programs (such as Premier, Novation, Innovatix, Ceres, Tide­water, HPSI, etc.). Group purchasing organizations can provide real cost savings opportunities. Since ABC purchases from many vendors, Connie assumed they were not a GPO member and were not taking advantage of the programs since most GPP’s require an 80 percent purchasing commitment. She knew from experience that some of the advantages for facilities when they belong to these purchasing groups are: Connie has consulted with LTC facilities for years, and she knows that a 100-bed facility typically spends about $150,000 on food per year. A 5 percent savings equals $7,500 per year. This would be a savings of approximately 21¢ per resident per day in actual food cost, and even more when they account for all the additional savings, such as the time they would save with orders. Most facilities Connie worked with did not understand how expensive it is to purchase from many vendors. First there is the savings with primary vendors. Connie likes to use the analogy of insurance companies. You often get a substantial discount if you purchase all your insurance from one company rather than spread it out among several companies. The same is true for food. She has seen time and time again that shopping around to save 1 percent may actually cost a facility more money.

If ABC facility would just reduce their orders to five per week, they could save approximately $5,200 per year (half of the $10,400)! The bottom line is the more you can consolidate, the more you can save.

Connie’s list of cost suspects was dwindling. She re-examined her list and was pleased to cross off several more culprits. 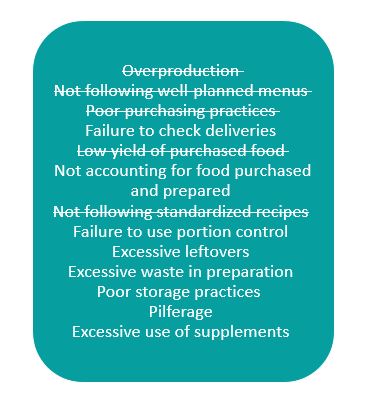 ​Connie has made great progress on “The Case of the Disappearing Money,” but still has lots more work to do to get to the bottom of this mystery. Stay tuned as she takes a further look at the purchasing process and uncovers many more clues about what is happening to ABC’s money! (See The Case of the Disappearing Money:  Part 3)
©Kim Hofmann, RDN, LD.
Back to Main Article Page